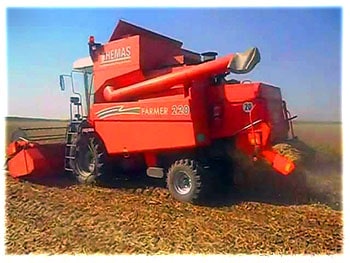 Fortschritt – the largest manufacturer of agricultural machinery in the former GDR (German Democratic Republic, DDR). The production of combine harvesters in the GDR was started thanks to the technical assistance of the Soviet Union. The model S-4 was adopted as the basis and the production started in 1948. The combine harvester was equipped with a 4-meter long header and a 6-cylinder gasoline engine. At that time there was no variator in the harvesters. In 1953, the harvester received a diesel engine and was designated E-171. In 1968, the outdated Fortschritt E170 series of harvesters was replaced by a completely new E512 harvester. It differed from its predecessors primarily in size. In 1983, the E512 was replaced by the new E514 model with a 115 hp engine. In 1988, the E 517 harvester appeared. The manufacturer claimed a 30% reduction in grain losses compared to its predecessors.